Posted by Larry Blumenthal in Silly Behaviors on March 29, 2010 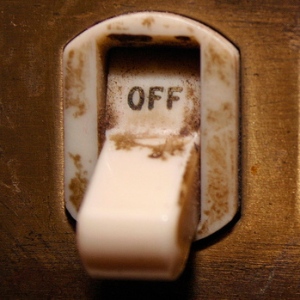 Clay certainly has some interesting obsessions. For one, we can’t keep a bottle of hydrogen peroxide in the house. We’ve tried. We buy them. We put them behind locked doors. (Many doors in our house have locks, a topic for another time.) If we slip, though (leave a door unlocked, leave a bottle out for just a second), he will find it, and he will dump it in the sink. Sure, he likes to dump shampoo and liquid soap, too. But he attacks hydrogen peroxide like a hungry dog going after a dropped hot dog.

Clay also obsessively turns on lights. As the guy who pays the electric bill every month, I obsessively turn lights off. This leads to some interesting conflicts. END_OF_DOCUMENT_TOKEN_TO_BE_REPLACED

autism, father of child with autism

One of Those Days

Posted by Larry Blumenthal in Daily Life on March 29, 2010

Clay didn’t fall asleep until after midnight. 12:30 to be exact. He woke up sometime around 3:30 a.m. and has been up ever since running laps through the house. I can hear him bouncing on our bed as I am writing this, although he seems a little calmer and is all smiles. First day of spring break, so no school this week. I am the officer on duty for the next few days since I work from home. It is cold and rainy outside and is supposed to rain through tomorrow. ’nuff said.

autism, father of son with autism

Call of the Wild

Posted by Larry Blumenthal in Daily Life on March 28, 2010

As soon as Clay got off the school bus Friday afternoon, ran up the driveway and into the house, I sensed his energy level was high.  So, even though it was 50 degrees outside and windy, a walk in the woods at a nearby nature center seemed like just the ticket to get us through until dinner.

Clay has been to this nature center before and hurried ahead of me on the trail to a bench next to a pond. He sat down. I sat next to him. About 100 feet away, nine turtles were perched in a neat row on a log. One turtle at the far end was twice the size of the others, so I’m guessing it was a mother and her eight babies. END_OF_DOCUMENT_TOKEN_TO_BE_REPLACED