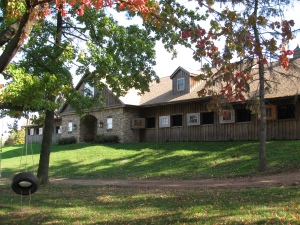 We had been at the sprawling horse farm for about 45 minutes, when the owners popped the question.

Do you think Clay would like to ride one of the horses?

Clay had loved almost everything about his trip on this sunny fall day so far, but we weren’t sure how he would answer that.

He seemed at home immediately in stables built by the couple who had generously offered to have Clay visit when they heard about his growing love of farm animals. 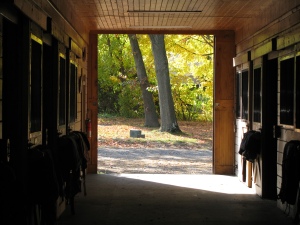 He was a little nervous about feeding carrots to the horses, but gradually got the knack of it. 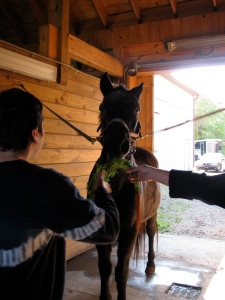 “Which horse is your favorite?” my wife typed on the computer keyboard Clay is learning to use to communicate.

“Rocky,” he typed in response. “So friendly.”

The stables was holding a naming contest for a newly acquired horse. 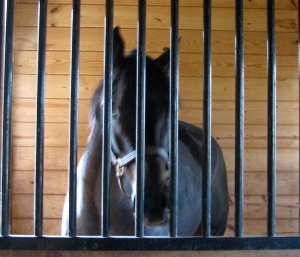 Using his keyboard, Clay offered the name “Diane,” which was promptly added to the suggestion board.

I enjoyed the rich leathery smell when we sat in a room filled with saddles and other equipment. Clay didn’t agree.

“Stinks in here,” he typed.

My wife, Clay, the couple that own the horse farm and I wandered out to watch a woman work with her horse in the practice area. 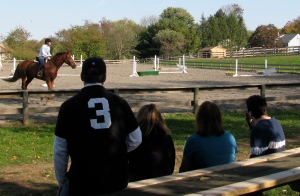 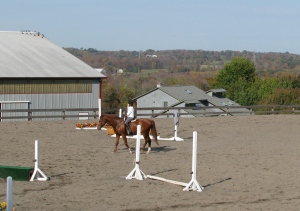 Then we visited a six-month old wild pony that had been adopted from the Chincoteague National Wildlife Refuge on Assateague Island.

Clay fed the other horse that was in the same pen. 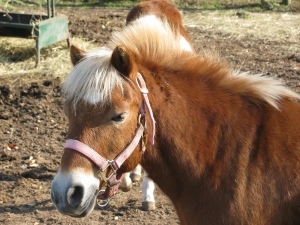 Then, for the first time on that visit, he became agitated. We worried that he had enough and the visit was over. But after several minutes of being upset, Clay finally typed, “So sad because of the electric fence.” We had told him not to touch the fence around the pen because it had an electric wire. Seems that he was worried that the horses would get hurt. The owner explained that the electric fence was there to protect the horses. Among other things, it prevented them from chewing on the wooden rails and choking on splinters. Clay eventually calmed down, and we wandered back into the stables to visit the other horses. There are 27 on the farm.

That’s when the question came up. Would Clay like to ride Rocky? Rocky was the gentlest horse there. The owners’ son had learned to ride on him. He was already Clay’s favorite. My wife and I didn’t think Clay was ready to climb on a horse that afternoon (he had sat on one briefly at camp last summer), but she asked him on the keyboard. His answer:

So, Clay and his entourage took Rocky for a spin.

Before going up a steep incline, we asked Clay if he was OK with that. “Sure thing,” he typed again. 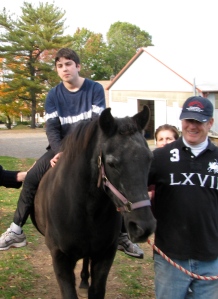 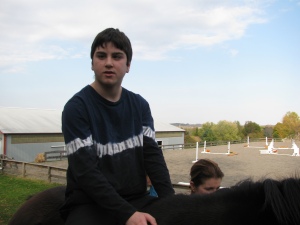 The little fellow is a born rider.

Back in the stables, we lost Clay for a few moments, but then found him sitting—where else—in a little utility vehicle. (His love of these is well documented.)

We walked over to visit with a retired race horse called “Son.”

“What do you think of him?” my wife asked.

“Simply beautiful,” Clay typed. He hung out in an indoor area for working with the horses for a bit. 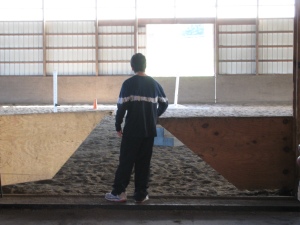 After two hours, it was time  to head home. Asked for any final thoughts, Clay typed, “A great day.”

When we said goodbye to the owners, he typed, “So happy.”

Back at home a few hours later, when he had had time to digest the experience, the following conversation took place on the keyboard:

“What did you think about riding Rocky?”

“How did it feel when you were riding Rocky?”

“Can you give me one reason?”

After some thought, here is what Clay typed: 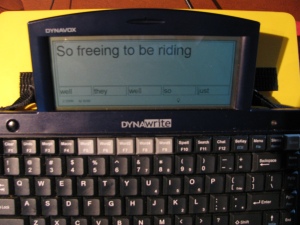 Thanks so much to the stable owners for giving Clay such a great experience.You can bet we will be back.

This entry was posted on October 25, 2010, 1:51 pm and is filed under Communicating. You can follow any responses to this entry through RSS 2.0. You can leave a response, or trackback from your own site.