While I am off in San Antonio—visiting the basement of the Alamo, among other things—Clay’s number one fan and my wife, Roe DeLuca, has graced us with a guest blog post. Enjoy. 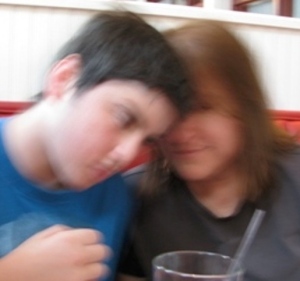 If you’ve been following this blog for some time, you may have noticed an interesting component of Clay’s writing: he refers to himself as “we.”

When he first started using it, I thought he was talking about the two of us, since he currently needs resistance on his wrist when typing to jump-start brain-body connections. However, it was soon clear I was off the mark. He was, in fact, talking about himself.

The clarity of Clay’s deepness and spiritual connection became apparent last summer, when his typing really took off. A few times he would eagerly lift his hand to signal he wanted to say something, and then type some surprising statements. Here is one such exchange:

Clay: “We are sad because we are a wasted race. We waste a great deal of wisdom.”

Me: “What can we do to stop wasting wisdom?”

This past November, we invited a communication trainer from Syracuse University to come to our house and type with Clay and consult on communication devices. She asked Clay a question, and he replied with his usual “we.” She wondered why he referred to himself that way.

Clay’s typed reply: “We are a person and a soul.”

Indeed. Clay’s answer was not something you’d expect from a 15-year-old, especially one with verbal communication difficulties. Yet, I’m learning that Clay is not alone. Autism advocate Bill Stillman encountered so many stories about ASD folks with spiritual and religious connections that he wrote three books on the subject.

The more I get to know my son, the more I am convinced that Clay has a level of conscious awareness that is beyond many of us. He, like his brothers and sisters who are not adept at communicating verbally, are actually much better at speaking the “unspoken language” that Paulo Coehlo writes about in The Alchemist, a language that monks aspire to connect to when they take a vow of silence.

It’s also why, when “experts” in years past told me we needed to change some of Clay’s mannerisms so he would act “more appropriately,” my Italian temper kicked in: What makes you (or anyone else) the arbiter of what is deemed appropriate? And why would we want to change the very things that make Clay so special, gifted and lovable?

So, I have never corrected Clay’s use of  “we.”  I honor and embrace the royal we—actually, the spiritual we—thank you very much.

This entry was posted on February 18, 2011, 9:17 am and is filed under Communicating. You can follow any responses to this entry through RSS 2.0. You can leave a response, or trackback from your own site.