Halloween has never been our favorite holiday.

Let me count the ways. Clay has little tolerance for costumes, especially masks and hats. Due to his dietary issues, he can’t eat most of the candy that he is offered. Decorations have a short shelf life with Mr. Busy Hands in the house. And, because of the peculiar positioning of our neighborhood between two busy roads with no sidewalks, no trick or treaters ever darken our door.

We had a few good years early on with Clay dressed as either the Cat in the Hat or a chef, but were not unhappy when he grew out of a holiday that mostly brought agitation combined with a sugar high.

This year, a local autism organization organized a Halloween party at a Knights of Columbus hall. It promised to be Clay friendly, so we asked the little fellow if he wanted to go.

“sure,” he typed on his keyboard.

Makes sense. The Man in Black is one of his favorite singers. So, Friday night, we dressed Clay in a black cowboy hat, black velour shirt, black “Johnny Cash – The Man Comes Around” t-shirt, black jeans and black sneakers.

Then we loaded the boy in black into the car and were off to the party.

The joint was jumping by the time we got there. We could hear the music from the parking lot. The dance floor was packed.  Two quick observations about parties with kids with autism: 1) It is hard to take pictures because nobody stands still for more than a few seconds. 2) Some of these guys seem born to dance. There are kids on the spectrum that exhibit a visceral connection to music that is a joy to watch. No lessons. No partners. Just music and movements.

Clay’s initial interest, of course, was the food. He had a soft pretzel in his hand quicker than you can say, “I wonder where the food is?” Thankfully, there was a “gluten free/casein free section.”

The Rice Krispy treats were a hit. So were the pizza crusts when we let him cheat a little later on. 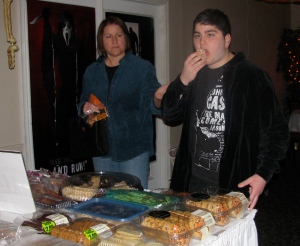 A nearby hanging skeleton provided entertainment. 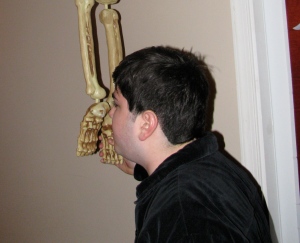 After a quick snack, we moved over to the official photographer area. The crooning cowboy kept his hat on for a few photos. 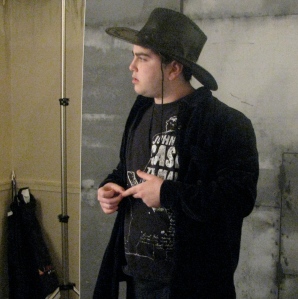 Then it was time for an iPad break, which quickly drew a crowd, including a toy soldier. 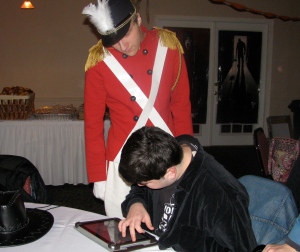 We checked out the costumes for a bit. 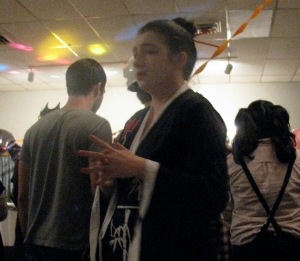 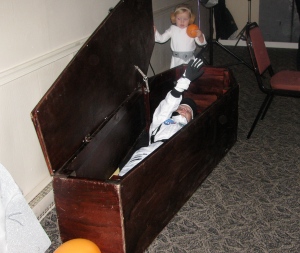 “sure” came the response, so it was off to the dance floor. 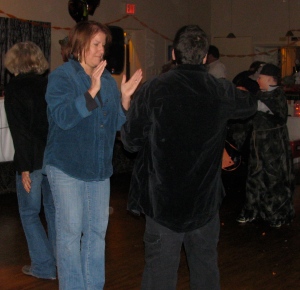 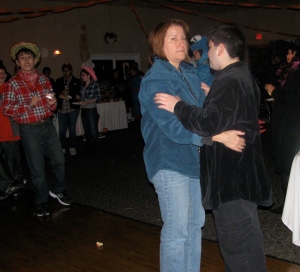 By then, we were dead tired. Although not as much as this guy.

Time to head home. The next day, my wife cornered the little guy with his keyboard for any final thoughts on the monster mash.

“What was your favorite part?”

Our first “fun” Halloween in a long time. A heartfelt thanks to the Autism Cares Foundation for bringing Halloween back to a family that had lost it.

This entry was posted on October 31, 2011, 8:21 am and is filed under Communicating, Daily Life. You can follow any responses to this entry through RSS 2.0. You can leave a response, or trackback from your own site.