I’ve been busy transitioning to a new job, so my wife, Roe DeLuca, has stepped in to write about Clay’s unexpected Christmas gift request. Enjoy.

It was two weeks before Christmas, and we still had no idea what to get Clay.

Clay has rarely been interested in toys and his visual issues prevent him from playing sports. He does enjoy the rhythm and silliness of Dr. Seuss books and will repeatedly watch his two favorite movies (Toy Story and Shrek), but we always feel guilty that we don’t match the bounty received by his older brother.

Now that Clay communicates through a talking keyboard, I decided to ask him if there was anything special he’d like to see under the tree this year. 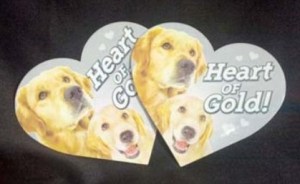 Clay walked right to his iPad. “A dog,” he typed.

“Really? What kind of dog?”

This was a surprise, to say the least. We already have a stray in the house, Miles, our 8-year-old Basset Hound, who we rescued last November. Now, Clay was asking for a Golden.

Rusty works his way into one of the photos I had framed for Larry's 40th birthday.

We had a Golden Retriever years ago, Rusty, a gift from me to Larry when we were still dating. Rusty was a part of our family for 15 years. Our extended families still talk about him. The way he would check on the kids in their beds before retiring himself at night. The way he would scrunch up his snout in a doggy smile when people came to visit. The way you couldn’t take a picture in our house without him being in it. We weren’t sure if Clay remembered him, but he has typed about Rusty a few times and clearly does.

A childhood friend whom I recently reconnected with has adopted through Delaware Valley Golden Retriever Rescue, and encouraged us to contact the organization.

Like the experience of adopting Miles, the process has moved quickly. That Thursday evening, I filled out their online application. Friday, our application was accepted. Two days later, a home visit took place, and the Monday before Christmas we were approved as adoptive parents.

We now think we’ve found the right dog for our family, and a visit to Golden Gateway is scheduled for Saturday.

I’ve been trying to get Clay to type more about his insistence on getting a stray. I was hoping for one of his deep statements, possibly along the lines of helping a lost soul, but he just keeps typing “so awesome.”

Later, I mull things over and decide that Clay is a true Zen master who embraces wabi-sabi, the Japanese art of finding beauty in things imperfect and unconventional. An article describing chado, the Japanese tea ceremony, includes a whole section on wabi-sabi:

[Wabi-sabi] is simple, slow, and uncluttered—and it reveres authenticity above all. Wabi-sabi is flea markets, not warehouse stores; aged wood, not Pergo; rice paper, not glass. It celebrates cracks and crevices and all the other marks that time, weather, and loving use leave behind. …Through wabi-sabi, we learn to embrace liver spots, rust, and frayed edges, and the march of time they represent.

And so, we begin a new year with a new chapter of discovery as another patina-ed soul joins our House of Wabi-Sabi, a historic home that is itself weathered and frayed.

Clay’s attunement to animals is a marvel to witness—his comfort level around horses, his joy in feeding the goats and sheep at camp, his unmistaken bond with our dogs. As we ponder Clay’s life beyond school, I’ve begun looking into ways we can harness that connection into a meaningful career. Perhaps working at a vet’s office or a dog rescue organization or at a stable or a farm with animals. Wouldn’t that be “so awesome”?

This entry was posted on January 3, 2012, 9:52 am and is filed under Communicating, Daily Life. You can follow any responses to this entry through RSS 2.0. You can leave a response, or trackback from your own site.