Here’s the question: Where do you hang a swing that is big enough to hold six kids at the same time?

I wrote earlier about the demise of Clay’s beloved swing set this past spring. Clay can be tough to buy presents for, but when his birthday came along in early July, it was a no brainer to find a replacement swing. My wife did some online research and found a tree swing that looked like it would do the job (for a lot less than the professional ones that most therapists use.) The large size seemed about right. His Grandpop Tony offered to buy it. All was set.

We waited a little too long to make the purchase, though. So, when we went online a few days before the big event, only the extra large was in stock. The description said it held up to 600 pounds. But it was on sale for less than the large, and we were under the gun. We explained to Clay that it wouldn’t arrive until a few days after his birthday. He was fine with that.

When the precious gift arrived, in a box that could have held a king size bed, I stashed it in a corner of the kitchen and went to study the backyard for a tree branch big enough to hold this carnival attraction. It quickly became clear that wasn’t going to work, so I settled on one side of our garage. A side stuffed to bursting with old furniture, kid’s bikes, wood, construction material, camping equipment, tools and squirrel droppings. But it had one thing going for it. Tree-trunk-size beams on the ceiling, some still displaying their original bark. They had stood for 150 years. They should be able to withstand the little fellow’s maniacal swinging. We hoped.

While our resident mother and baby vulture watched warily from the chimney, we spent a Saturday cleaning out the rubble, sweeping the floor, rearranging the surviving items, and laying down an old rug. After two trips to Lowe’s, I managed to get enough hardware and by Monday evening, the Ferris Wheel-size swing hung in a position of honor.

Once he was using it, there was no getting him out of the garage. 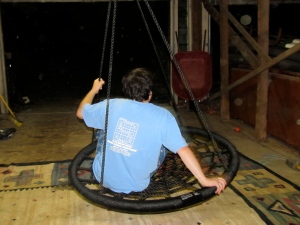 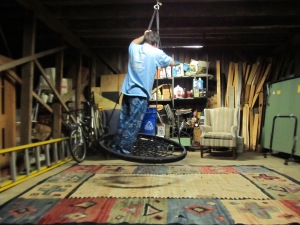 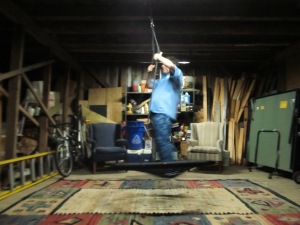 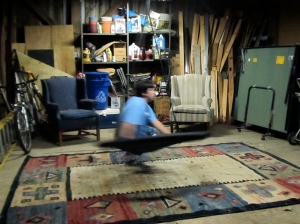 “so happy to have a swing back,” he typed.

This entry was posted on July 23, 2012, 10:20 am and is filed under Communicating, Daily Life, Silly Behaviors. You can follow any responses to this entry through RSS 2.0. You can leave a response, or trackback from your own site.