After working through most of last weekend, I decided to reward myself with a few hours off on Wednesday morning. Spring is in bloom at last in our neck of the woods. A walk at a nearby state park seemed like the way to go.

Sitting by the dam, listening to the rushing water with a little time to clear my head, it hit me how much I have missed writing this blog during the past several hectic months. So, I thought I would offer a quick roundup of recent happenings. Can’t promise regular updates just yet, but we’ll see how things go. One step at a time, as I have learned from Clay.

Cowboy Clay continues his love of horseback riding. On Wednesday afternoons, you can find him at Special Equestrians (above) roaming their fields. On Saturday mornings, he is at Rainbow Ridge Farm, circling the corral. Through many months of work, he is mounting more smoothly with a boost, and holding the reins – most of the time. (When they trot his arms shoot out in excitement and all bets are off.) Dismounting remains a three-person effort. He has learned to lean forward, then slide off sideways. The concept of letting his feet fall first has not clicked, yet, though, so he tends to let himself drop into the arms of whoever is there to catch him. He’s a trusting soul. 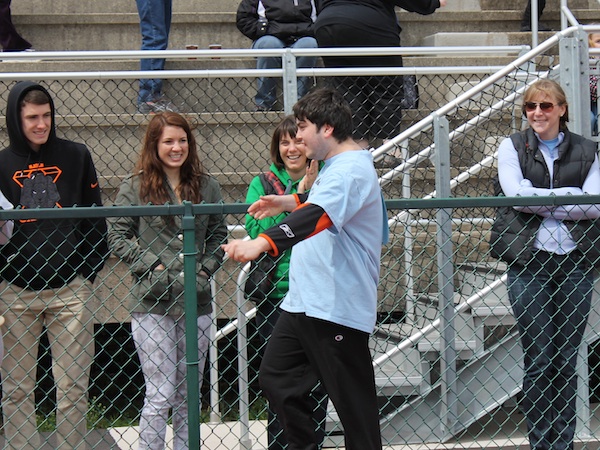 During the race: Smiles all around

A few weeks back, Clay competed in the annual Special Olympics at his high school. His running buddy Sam, who also worked with him last year, kept an eye on him while we waited in the brisk wind for his first race. I think Clay covered more ground waiting than he did during the 25-yard dash he competed in. He ran well when the time came, hopping and skipping down the track with a big smile on his face – winning over the crowd with shear enthusiasm (above).  He ran so enthusiastically, in fact, that after crossing the finish line he just kept running to the far side of the stadium. By the time we rounded him up for his next race, it was over. Oh, well. A hot dog and soft pretzel eased the pain. Thanks again to Clay’s running buddies Sam and Sean, whose maturity, caring attitude and obvious affection for the little guy are much appreciated. (Photos courtesy Clay’s Aunt Ann)

Winners: Clay and his race buddies Sean (left) and Sam

After a several month hiatus, we have begun official typing sessions again for the little fellow. My wife managed to lure typing guru Marilyn Chadwick into monthly visits with several families in our area. Chadwick, a speech/language pathologist who has been working on supported typing at Syracuse University for over 20 years, has spent some time with Clay in the past. Before the first session, he typed, “We are so happy to be typing with marilin.”

The first session went well. My wife, who is on a whole different level than me, got instruction on working on rhythm. I received more basic exercises – supporting Clay while he goes through some pointing and spelling apps on his iPad. Here is what he had to say:

“we are worried about school. really treated like a dummy. so splittinglly bored … please tell all schools so they remember what marilin says … we want to learn school things. feel silly with typing with dad. we havent typed with him in a  while. so awesome to type with dad. really great to be here.”

Good to be back in the swing with typing.

The black vultures who nested in our garage for the first time two years ago, were here off and on throughout the winter and are settled in now that spring is here. Clay’s original assessment that they are “docile,” has turned out to be perceptive. They are acting as if there’s an egg to watch in the garage loft  (I’m not going up there to check. You are welcome to, if you like.) – coming and going on a regular schedule. We often see them circling high above our house in the morning and late afternoon, looking for a meal. Could be another little family member sometime in the next month or so. Stay tuned for pictures. (Photo courtesy Clay’s Aunt Ann.)

We’ve had the basset hound (Miles) we rescued for 2-1/2 years now, and the golden retriever – Clay’s Christmas present –  a year and a few months. Miles, who at first would pee two feet from the back door rather than spend time in the back yard, is now fully settled in, happily sunning himself like a fat sausage on the patio on lazy afternoons. (See below) He still takes awhile to warm up to visitors. The golden – Cassie – had a further journey after spending seven years in a rabbit cage, but is making progress. She still hasn’t wagged her tail, and probably never will, but it is a joy to see her romping in the back yard like a puppy, rolling on her back. Early on, we could never catch her asleep. She was on constant alert – spooked by the slightest noise – and often left the room when Clay entered. Now, we occasionally find her accepting Clay’s touch or stretched out on a comforter left on the floor by the little fellow, quietly dreaming. Little bits of progress all around.

That’s it for now. Hope to be back soon.

This entry was posted on May 10, 2013, 9:57 am and is filed under Communicating, Daily Life. You can follow any responses to this entry through RSS 2.0. You can leave a response, or trackback from your own site.