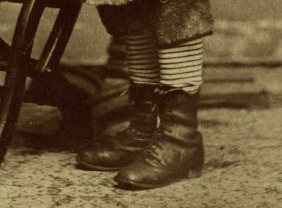 Getting a new pair of shoes was a butterflies-in-the-stomach experience for me as a kid. Nearly in the same category as a visit to the dentist.

Once a year my mother would take my brother and I to a corner store in a decaying neighborhood near where she grew up.  Inside, an old man, stooped with age, arthritic fingers smelling of foot sweat, breath reeking of feta cheese and death, carefully measured our feet – poking and prodding – while we sat in tiny chairs. Next, he would retreat to the back room, which I imagined contained all sorts of horrors – a wreath made of pinky toes, jars of pickled children’s feet, the mummified carcass of Dr. Scholl.

There were no surprises when he came back. My mother, a stickler for good shoes, only allowed one brand – Stride Rite. And we could choose from a wide selection of two styles – both in black.  The shoe zombie would return bearing boxes, strap us into our new shoes, then scratch the scabs on his head while watching us walk around the empty store. More poking and prodding followed, after which we would be released with a grunt to slip and slide in our new shoes on the worn carpet while Mom wrote a check.

At least, that is how I remember it.

Taking Clay for new shoes creates a similar feeling in the pit of my stomach.

Over the years, we’ve developed methods to make it easier. We time it carefully, make quick decisions and clear several hours of downtime afterwards for all of us. Clay has a high instep, wide feet and a bunion from the way he twists his foot when he walks. (Surgery is out of the question. The little guy would have to stay off his feet during a long recovery period. He doesn’t stay off his feet to put his shoes on. He stands up to eat dinner.) We take him to a specialty shoe store. An old time store where they keep his records on three-by-five cards. I keep looking for the penny candy and a case filled with home remedies for rheumatism.

We took him there two weeks ago, late on a Saturday morning in the hopes it would be less crowded. Lady luck was smiling. There was just one customer when we walked in. The little guy did well. 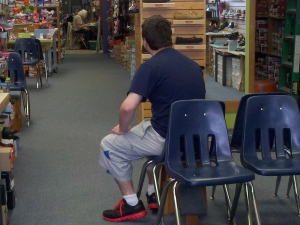 He sat while a patient and understanding woman – Beverly – measured both feet, talking to him like a teenager. We learned long ago to start with size and then see what is available. After careful measuring, Beverly came back optimistically with six or seven boxes.

Clay typed on his Mom’s phone that he liked the first pair, but Mom and Dad exercised a veto because they would have quickly become visibly dirty. Did I mention Clay puts more miles on his shoes in one week than the Israelites did in 40 years of wandering the desert? We tried on a few more until the woman took out a pair of black New Balance beauties with red laces. Clay kicked off both of the other shoes he was wearing and waited for her to lace on these new ones.

That was it. They are so light and comfortable he actually slept with them on a couple of nights without us realizing it.

Quick exits are key. We packed him up, paid the bill and headed to the car. As we were pulling out, the woman came banging on our car window waving a free pair of replacement red laces we had forgotten to take with us. My wife ran back into the store to see if they had an email address so we could thank them by sharing this blog entry.

The elderly owner shook his head.

“We don’t even have a computer,” he said.

No modern technology. No zombies. Just old time customer service. And at least one happy customer.

This entry was posted on May 31, 2013, 8:02 am and is filed under Communicating, Daily Life. You can follow any responses to this entry through RSS 2.0. You can leave a response, or trackback from your own site.