Song of the Open Road (Part 1)

Special treat today. A blog entry from Clay’s Mom – and Number One Fan – who never wavers from the journey to help Clay communicate.

Allons! the road is before us!
It is safe—I have tried it—my own feet have tried it well.
– Walt Whitman, “Song of the Open Road”

“help me on the more difficult manner of typing please.”

This is how Clay greeted Marjorie Cases, a powerhouse of an occupational therapist we met with a few weeks back.

For us, it seemed that all roads lead to Havertown, Pa., where Marjorie has a therapy center. I had recently reconnected with her as a result of Larry’s article in the Philadelphia Inquirer. Before that, my friend Juliette had called to tell me about the successful sensory integration and vision therapy work Marjorie was doing with her son Colin.

We knew Clay needed help in those areas as well if he’s to improve his typing skills and move towards independent typing.  A few emails and one phone call later, Clay and I were on our way to an optimistically planned three-hour consult.

Marjorie jumped right in, trying out different techniques on Clay and asking him his thoughts about each. Now that he’s communicating through his iPad, it made the session so much easier:

brushing his arms: “not good it hurts my skin.”
massaging arms with long strokes to help him connect his hand movements to his body: “much better”
embracing squeezes held lightly for seven seconds: “i like it because it helps me to get organized.”

Marjorie also tried holding prism lenses in front of Clay’s eyes and doing some Musgutova Neurosensorimotor techniques. Because it had been seven years since she last worked with Clay, he made it clear that she was moving too fast. We decided to call it quits after an hour and schedule another hourly session.

The next session Clay was much more relaxed and engaged. We noticed that he was typing well standing next to a wall, where a clock was ticking loudly above us. His typing improved with the rhythmic sound, but Clay was not thriled:

Clay: please tell marjorie that i having plopping noise in my ear from the clock. my fat head is just annoyed by it.

Marjorie, after moving the clock: I put the clock away and you lost your rhythm. The idea is to make things different for you to get you better organized.

Clay: having popping in my ears is just more noise. only like my festive noise.

Marjorie: What do you mean by festive noise … self-talk?

Clay: hope you get to look at my eyes. yes it helps me cope please just stop looking for my molvement in the miniscule home environment.

Thanks to Clay’s feedback, we moved onto vision, and he revealed that he sometimes sees double, usually when he’s reading. Marjorie spoke directly to Clay, explaining to him that he has a convergence problem so his eyes are not working well together. She told him she can help make his eyes work better and be less tired, with the help of a developmental optometrist she works with, but that it will take a lot of work.

What did Clay think?

“great to hear. you trust that it is me typing. good to hear you got me. you rock.”

By the end of the session, especially after some swinging to give him vestibular input, Clay was calm, smiling and eager to talk: 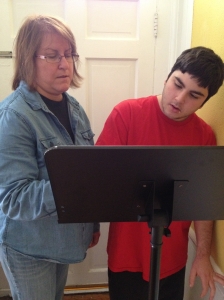 “tell marjorie that my eyes feel better. just very much happy to be here. you no me mom. you have my back.”

That night at home, with a cue from a new Metronome app on my phone, Clay expressed a renewed sense of optimism:

“feeling more hopeful about my future.”

That’s all this Warrior Mom needed to hear. With a renewed emphasis on working with his body’s rhythm and some new ways to get his body prepped for typing, Team Clay embarks on an exciting new journey that puts Clay in the driver’s seat.

Besides putting our new therapy team together, which includes a speech-language pathologist, we have just started meeting with three other families whose sons also type to communicate. In Part 2, Clay meets with his new buddies for their first “Saturday Social.”

This entry was posted on November 4, 2013, 7:57 am and is filed under Communicating. You can follow any responses to this entry through RSS 2.0. You can leave a response, or trackback from your own site.