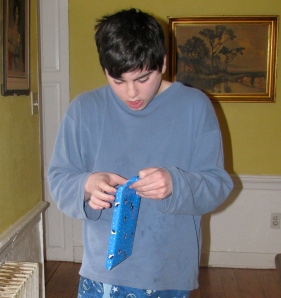 Opening a gift on Christmas morning

Just when I think I’ve started to figure Clay out, he tosses a curve ball.

He had what we thought was a full Christmas this year.

We spent Christmas Eve with my wife’s family. She is one of five, so it was a full house at her brother’s place. We know from experience to prepare for the possibility that Clay won’t last long. So, my wife and older son arrived around 3 p.m. Clay and I showed up fashionably late around 5 p.m.

The party was in full swing when we got there. (I’ve noticed that the greetings are louder and warmer if you arrive when everyone is already a couple beers ahead of you.) Clay typed “Merry Christmas” on the keyboard he uses to communicate, shook a few hands (my wife’s family doesn’t let him get away without a greeting), typed “Sorry to hear about your dog.” for my sister-in-law who received some sad news about one of the family’s cocker spaniels recently, then shot upstairs to the comparative quiet of the landing. We had prearranged with my wife’s brother and his wife to lock all the doors upstairs.

Pinball boy spent the next 90 minutes traveling a continuous circuit between the downstairs bathroom, a mountain of shrimp in the kitchen, a video we set up for him in the dining room and his second-floor sanctuary. My wife, older son and I acted as sentries, stationed in strategic locations, communicating with hand signals and eye contact.

After wolfing a plateful of brisket for dinner, Clay typed, “We are ready to go home.” We do our best to respect his newly acquired ability to communicate his wants and needs, so he and I hit the road a few minutes later.

The next morning we tackled the ceremonial opening of the Christmas presents. After 15 years, we’ve learned to let Clay go at his own pace on Christmas morning. He has never been one to wake up early to tear through his presents. Truth is he rarely wants anything aside from Dr. Seuss books and videos, and is extraordinarily pleased when he gets them.  He’ll wake up when he is ready. Wants breakfast more than presents. Will open one or two of his gifts, wander upstairs to his room for awhile, come down to open another.

Thidwick the Big Hearted Moose and How the Grinch Stole Christmas were handed over immediately to Mom and Dad for reading out loud. The rest he dropped on the floor for investigation later. The whole process takes a couple of hours, and we just let it unfold. It is not exactly a McDonald’s-commercial-type Christmas morning, but that’s OK.  We’ve learned through many teary holidays that the more you get in his face, the tougher it will be. (Plus McDonald’s in the morning leaves you feeling nauseous the rest of the day.)

My parents arrived at mid-afternoon for a visit, carrying a giant bouquet of fruit, which turned out to be Clay’s favorite present. He spent the rest of the day pulling off pieces of melon, grapes, strawberries, pineapple. A perfect Clay set-up. Finger food that you can graze at will.

Late on Christmas night, while the rest of us were lounging in front of the fire in the living room after a quiet dinner, Clay started becoming agitated. He had been bursting with energy all day, driving on all cylinders. A spider monkey on speed. We figured he was succumbing to a headache from all the excitement (and the jumbo box of Junior Mints he inhaled). Not exactly. The following conversation took place between Clay and my wife on his keyboard:

“Why are you sad?

“Sad because we pass sad day of Christmas.”

“A sad day because we are alone.”

“What do you mean by alone?”

“We don’t have family here.”

“Grandmom and Grandpop came to visit.”

“So true, but not Uncle Andy and Aunt Elise and Aunt Bobbi and Uncle Jay and Scott and Lisa.” (My side of the family.)

Go figure. As hard as it is for him to spend time with family—the noise, the crowded rooms, new surroundings, the expectations on him to greet and respond to people, the fuss when he opens presents—he feels sad when he doesn’t get to see everyone. There is a Christmas message in there somewhere. I’d try to figure it out, but I have to go shovel snow now. You’re on your own.

This entry was posted on December 27, 2010, 1:50 pm and is filed under Communicating, Daily Life. You can follow any responses to this entry through RSS 2.0. You can leave a response, or trackback from your own site.