Relations seem to be warming between Clay and Miles, the basset hound we adopted two months ago. We don’t know a lot about our new dog’s background. What we do know is that he was found tied behind an abandoned house, half starved and suffering from heart worm. Even though he is seven years old, most of the experiences of being part of a family seem new to him. It has been interesting watching Clay respond to that, especially as we worked our way through Christmas and the subsequent snowstorm this past week.

Christmas morning, while Clay and his older brother were opening their gifts, I got down the stocking we had hung for Miles and handed him the bone that was inside. It was the sort of medium-size, peanut-butter-filled hard bone that our 100-pound yellow lab would have chomped through in about 30 minutes. Miles took it in his mouth, but had no clue after that. He disappeared with it upstairs for awhile, then came back down, jumped on the sofa and tried to bury it between the cushions. Clay thought that was pretty funny.

I did catch him nibbling on it a few hours later, but after three-days the bone remains barely touched. (Clay, of course, likes the feel of the bone, and I keep finding it on the kitchen counter. He also loves the racket it makes when he drops it on the kitchen floor.) A lesson for me in not buying the same things our previous dogs liked. 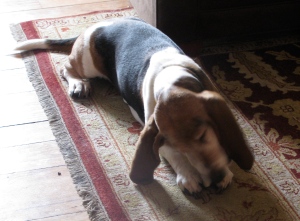 The day after Christmas brought a little over a foot of snow to our area. It looked beautiful as it fell throughout the day, and our yellow lab would have been in full frolic mode had he still been around. Miles—not so much. He’d stand at the door then back away as if we were asking him to walk on hot coals. With a Herculean effort between my wife and me, we managed to get him out to pee a couple of times during the storm, but he wasn’t interested in going more than about 10 feet from the back door.

I put him on a leash at our usual after-dinner walking time, and he padded about 20 feet into the yard, took care of all his business, and pulled me right back in. I can’t blame him. With his stumpy legs, the drifts must have looked like mountains, and the cold northern wind must have felt like hurricane-force. With the slipperiness and cold, Clay enjoys the snow much more from the inside, as well. Miles and Clay were on the same page. The warm sofa in front of the fire was the best place for all of us. 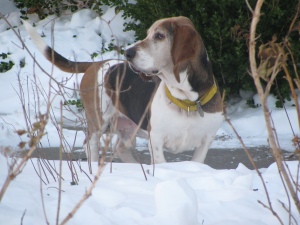 When Miles first came to us, Clay was not pleased that we had replaced our other dog so quickly. Watching the antics over Christmas got me wondering about what the little guy thinks of this new dog, now that the two of them have had the chance to get used to each other. (Miles loves Clay’s bed, and I’ve spotted Clay sitting next to him there a few times, tentatively petting his head. Clay rarely interacted with our yellow lab.)

“He is a good dog and we are so glad we are his home,” Clay typed when my wife and I asked what he thought of Miles the other night.

“We are happy he is smaller than Maverick (our yellow lab). So happy that we rescued him.”

“We are such friends.”

They seem to be getting along just fine.

This entry was posted on December 29, 2010, 9:03 am and is filed under Communicating, Daily Life. You can follow any responses to this entry through RSS 2.0. You can leave a response, or trackback from your own site.