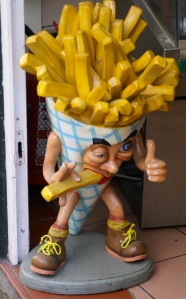 Most nights during the week I cook french fries in the oven for Clay. He likes to eat by 5:30, while the rest of the family isn’t home and ready to eat until about an hour later. To keep us all sane, Clay eats a light dinner—french fries and a hot dog or chicken nuggets—at 5:30, then joins us for the full dinner at 6:30. Two dinners? you ask, one eyebrow arching slightly. Yes, two dinners. The little guy is always on the move, burning fuel like a Chevy Suburban. Even when he is eating, he rarely sits down. Two dinners works out just fine, thank you very much.

I used to put the fries in the oven and go off to get some work done on my laptop for 20 minutes. Can’t do that anymore. Clay does not do the waiting thing well. He opens the oven every three minutes to see if the fries are done, yet. I’ve caught him once or twice eating still-frozen fries he swiped off the edge of the pan. Now I stand guard, usually sitting on the counter next to the oven reading the newspaper or a magazine. At long last, the timer dings, and I pull the fries out. This is where the serious wrestling begins. Clay tries to eat the scalding hot French fries off the pan as I pull it out. These fries are 450 degrees. I put them on a plate with ketchup. (Gotta put the ketchup on while the fries are still in the oven. You don’t want to leave the fries unattended at this critical juncture.) Next, he needs a drink. (If you put the drink out beforehand, he’ll drain it, and you’ll need to get another one, anyway.) I carry the plate with me to the refrigerator so that I can physically block him from reaching the fries. It occurs to me at this point that these fries could be engulfed in flames. They could be sitting in molten lava. They could be resting on the surface of the sun. And Clay would still be trying to get at them. Waiting until they have cooled is not on his agenda.

Of course, the fun is not yet over. I put the fries on the kitchen table for him, and deliver my standard warning.

“You know the drill, buddy. These are burning hot. Let them cool awhile.”

Doesn’t matter. He insists on picking the fries off the plate, then he drops them on the floor because, of course, they are too hot to hold. The dog tries to eat the ones that fall on the floor. The two of them won’t take no for an answer. Clay keeps picking them up and dropping them. The dog takes them in his mouth, spits them out, tries again.

Around and around we go on the calliope. All that is missing is the organ music.

autism, father of son with autism

This entry was posted on June 17, 2010, 8:32 pm and is filed under Daily Life, Silly Behaviors. You can follow any responses to this entry through RSS 2.0. You can leave a response, or trackback from your own site.