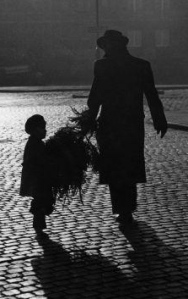 I lost it a few nights ago.

It started when someone (it truly doesn’t matter who, we’ve all done it) forgot to put the lock back on the bathroom closet. While my wife and I were eating dinner, Clay was upstairs quietly dumping witch hazel, mouthwash and shampoo on the bathroom floor, creating an inch-thick, three-foot-wide slippery soup. We cleaned it up as best we could (although two days later the bathroom still smelled minty fresh), and went back to eating.

It continued with Clay taking his pajamas off every 5-10 minutes for the next hour or so. (An odd compulsion we’ve been battling lately.)

And it culminated when I found him pajama-less, spinning on the floor in our bedroom. The little guy has been home too much with the cold and snowy weather. He’s bored. We understand. We all have cabin fever at this point. Fuses are short.

But there I was holding his pajamas and asking him five or six times in a row to stand up so I could get him dressed. He went on spinning and flipping. The next moment or two are a bit of a blur, although I’m pretty sure that I suggested to him in a rather loud voice that perhaps he should help me out by standing up for goodness sake. Or words to that affect. What I remember clearly was the sound of someone’s voice echoing off the wall and the sight of the dog, who had been standing at my feet, moving rapidly down the steps.

I feel terrible when that happens. Worse now that we’re beginning to understand what the world looks like from Clay’s eyes.

Check out these quotes from adults whose autism, like Clay’s, includes problems with body awareness and control. (They are from a book my wife has been reading called Real People, Regular Lives, by Sally R. Young, Ph.D., that profiles people who learned to communicate using the supported typing method we are working on with Clay. I don’t know where she finds this stuff, either.)

“To have autism is like having a short in a computer. I know what I want to do, but my body gets confused and it does not correctly carry out the orders my brain sends it. I take in information, but my body scrambles the output.”

“I could never make my body obey my brain’s requests; how could I make it obey mom’s requests?”

“I am not aware of my body unless it is touching something. Your hand on mine lets me know where my hand is. Jarring my legs by walking tells me I am alive.”

There I am angry with him over something he clearly struggles to control.

So I apologize to him for yelling and explain that I get frustrated sometimes, too. Clay gives me the 1,000-watt smile and accepts having his hair ruffled. He knows he can be exasperating, and he seems quick to forgive when I lose control. (“Stay strong,” he typed for his Mom a few months back, when she asked how she could help.)

Patience and acceptance. Two more lessons I can learn from the little guy.

On the other hand, spring can’t come soon enough this year.

This entry was posted on February 28, 2011, 8:31 am and is filed under Communicating, Daily Life. You can follow any responses to this entry through RSS 2.0. You can leave a response, or trackback from your own site.